On Wednesday 23rd of October 2019, Nandhini Kannan, Zinia Jubil and Gabriel Gomez took out the First Prize in Aerospace Engineering at the 2019 RMIT EnGenius event. We interviewed the successful “ViRACI”– Virtual Reality Aircraft Crash Investigations – team to understand a bit more about their joint project with MEMKO

“Our project is looking into virtual reality for aircraft crash investigation and how we can integrate VR into the physical process of going to a crash-site and investigating a wreckage”, Zinia explained. The main goal was to show how this idea can be used as an alternative to the current pictures and aerial views through the use of drones which can be difficult to investigate and become costly. “We looked into the benefits of being able to scan the crash-site and send it to the investigators who may not be able to physically visit the crash-site. Also, no health and safety hazards come with investigating the site through VR as opposed to physically visiting it”, added Gabriel. By looking into smaller air-crashes with mostly recreational aircraft, the team were able to model those specific aircraft into the wreckages and scan them using structured light scanners.

The ViRACI team aimed to create something new within the industry that may impact how aircraft crash-sites are investigated in the future. “By giving investigators the opportunity to visit crash sites anywhere and anytime, we are giving easier access and potentially saving a lot of money in travel to and from crash sites”, Gabriel responded. “We also think that it is a great way to train new investigators without having to send them to a crash site where they may not be experienced enough”, continued Zinia. The team were very happy with the outcome of their project and said that they achieved most, if not all of the objectives that they set out to achieve. MEMKO’s primary focus is to bring sustainable and measurable performance improvements to businesses through the integration of technology, training and process improvements. MEMKO is an engineering services business for the Aerospace and Defence sector and has been a Dassault Solutions partner for more than ten years. With more than 20 certified 3DEXPERIENCE engineers, MEMKO is in the unique position of understanding how to apply technology from a postion of deep subject matter expertise. 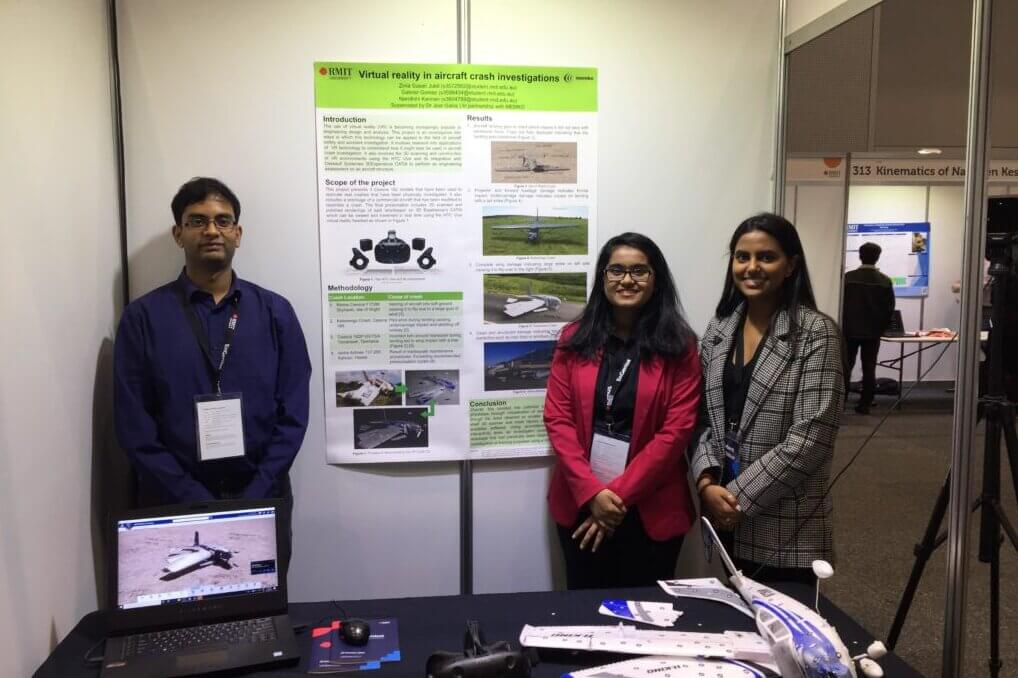 Advanced Scanning and Modelling with 3DEXPERIENCE

By using structured light scanners, the team was able to virtually render the actual crash sights and import them into CATIA. They used terrestrial point cloud scanners as they generally capture more detail and gave the team the ability to save terrain and debris around the area of the crash-site in a database that can be accessed by anyone who has permission. “The VR tool associated within the 3DEXPERIENCE Platform is very intuitive and the ability to recreate the crash site and then import it into CATIA to view through VR is something that is very unique”, Nandhini explained. The students said that they found the 3DEXPERIENCE Platform very easy to navigate though and it made the practical side of their project very easy to manipulate. “It’s much more user friendly. It is CATIA but the buttons are laid out in a much more accessible manner”, Gabriel added. Zinia also touched on how the HTC Vive option that is integrated within the 3DEXPERIENCE Platform is amazing and it is incredible how the two are able to work with each other so smoothly. During their showcasing of the project at the EnGenius event, many academics and industry judges found their project extremely fascinating and were able to see the potential within the industry that virtual reality possesses, in conjunction with 3D modelling.

“Finding a new innovative idea for accident investigations. This is what drew me to aerospace engineering in general, so to be able to study this topic for our Capstone project and look deeper into something that I was passionate about is definitely what drew me to this project”, explained Nandhini. The team did not know each other prior to applying to study on this project and formed a good bond throughout the year whilst working towards achieving their goals. “We don’t learn much about aircraft crash investigations within the university curriculum, so when I saw this as a possible topic, I thought that it was a good opportunity to learn more about something that hasn’t been covered in detail”, added Gabriel. The ViRACI team was crazy about finding a new idea that may actually have a lasting impact on the industry and not just achieving good grades. Their motivation and passion for this project is what drew them to the field and ultimately resulted in the First Prize that they received.

Following their graduation, the students are already looking forward and aiming big for their future. Gabriel has accepted an internship with Siemens in Berlin, in which he will be working with gas turbine engines. Zinia has also been recommended for an opportunity to work in Germany, with Airbus in Friedrichshafen. Nandhini will be continuing her work with X-Aero that looks at certification and airworthiness of drones made by the team. Facilitated by MEMKO and the 3DEXPERIENCE Platform, the ViRACI team was able to achieve their goals for their project and prove how Virtual Reality is a useful tool within Aerospace Engineering.